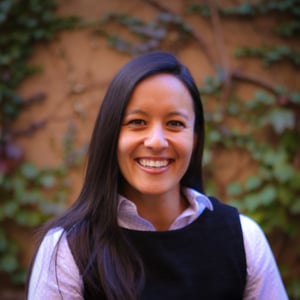 You may remember Vanessa Otero, creator of the Media Bias Chart and owner of Ad Fontes Media, from the insightful and timely live webinar she did with us earlier this year. (As a member of the InfoLit Learning Community, you can catch the recording of the session here.)

We caught up with Vanessa this week to discuss what bias is, whether it’s always bad, and how to make students care about finding reliable information. Here's what she had to say:
Bias is such a broad term. As with any broad term, if it means different things to different people, sometimes it loses meaning. If you’re arguing about bias, you might be talking about two different things or more, so it’s the source of a lot of arguments. A helpful way to think about it is that you’re always going to have some level of bias—it just means having positions or having a point of view on how things should be in the world. You can’t be a human and not have those views.

There are things that are generally agreed upon in society—murder is bad, and it’s bad to impose your views on other people, for example. But there are only a few views that are very widely held, and with everything else, people’s views can diverge to a degree. On a topic such as whether capitalism is a good system, people may have mild views in either direction. But then you have subjects that people diverge wildly on, such as gun rights—some think those rights are critical whereas others think they are absolutely a bane on our society.

The kinds of biased views that don’t bother people are the ones that are widely held. If you’re writing an article about Hitler and the Nazis in World War II, it’s really widely held now that Hitler was bad, the regime was a bad thing, and it’s good that we fought that war. But at the time that view wasn’t as widespread. There were people who were Nazis and fought on Hitler’s side and thought that what he was doing wasn’t bad. But we don’t look at articles about WWII and say that this article is biased against Hitler because we have a general consensus that what he did was a bad thing. Returning to the capitalism example and looking at The Economist magazine, the context of that magazine is that capitalism is good. Major U.S. newspapers are biased toward the idea that democracy is good. So we recognize that there are biases in the sources that are out there, the important thing is whether the bias is appropriate or not. And whether it is appropriate or not has to do with expectations.

Americans expect that major newspapers will have a bias toward democracy. Readers of The Economist expect it to lean toward capitalism being a good system. But where it gets problematic is when people are expecting to find the news of the day but the author is advocating for or against a political position that is hotly contested. That’s one reason why people complain about bias in our cable news networks. Fox News will air a lot of pro-conservative views that are held by a good chunk of the country, but not everyone. MSNBC will have a bias toward liberal, left ides. What bothers people is when they’re expecting something more straightforward and factual, and instead find someone advocating and telling them what to think. I think that’s the biggest problem we have related to bias right now.

There is a lot to be said for journalists trying not to be biased. You can control for a lot of things if you try. Being cognizant of where you are and reporting how you’ve been trained to report is important. There’s a lot of distrust now, and journalists could be trained more on what things that they say and do in their writing and anchoring cause the audience to trust them less because they appear biased. In reporting, stating facts is a baseline of the work. But you can say things that are true but are for example unfair, not timely, or irrelevant to the story. You can emphasize some facts more than others or omit some facts even if what you do present is true.

The biggest factor that makes people distrust journalists is when they start venturing into analysis or opinion without labeling it as an op-ed or opinion. Brian Williams was an NBC anchor for a long time, for example. In that role, he delivered little analysis, it was fact statement after fact statement. But now he is on The 11th Hour on MSNBC and it’s a lot of analysis and opinion. I haven’t seen any studies, but I would guess that his trustworthiness rating was much higher back when he was at NBC News, just because of the types of things he’s reporting on now. Local news is still more trusted, though. A study recently came out that said that about 75% of people trust their local news. In this environment, that’s a lot, and it’s a lot more than national news. I think it’s because it’s still that format—fact, fact, fact, notwithstanding that there are some biased local news programs, but for the most part, people get what they expect.

The big question is how to make students care about material they find that’s biased. It’s kind of like voters. You can teach people about voting and get them to register but getting nonvoters to vote is something we haven’t quite figured out yet. I think ease of use helps a lot. That’s why a lot of librarians and teachers have asked me if they can use the media bias chart in their lessons. Media bias and quality is an enormously complex subject and usually when were talking about it, we’re talking about it in anecdotes.

I got emails yesterday about President Trump’s USA Today Op-ed. They said, “you have USA Today listed as fact reporting, but they had this op-ed from Trump and it was terrible.” But that one item doesn’t discount all of USA Today’s work over time. It makes it difficult for somebody with limited political and news knowledge, especially a young person. They have a source that’s trusted, but then there’s an anecdote about a time when it wasn’t trusted. Those anecdotes stick in people’s minds and make them skeptical and feel like this is a problem that they can’t get their hands around and they can’t overcome, so they throw up their hands and say, “all the news is biased, I can’t trust anything.”

Dialing news media down to something simple and comprehensive like this chart makes it easy to present students with the idea that if you have better news sources, you can make better decisions as a citizen. You can make better decisions about who you vote for, what you eat, where you live and work, how you raise your children. If we can convey to students that news and the quality of information that you have affects your life, and convey that you have more information available to you than anyone in history and you need to be able to sort it out, we might be able to get students to care.

To learn more about Vanessa's work, be sure to visit her website, adfontesmedia.com. And to view the recording of her webcast, or join the conversation on media bias and other topics, visit us in the InfoLit Learning Community. Already a member? Log in here!